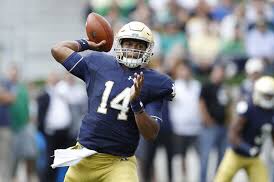 The Cleveland Browns and rookie QB DeShone Kizer have agreed to terms on four-year rookie contract. The deal is worth just under $5 million and includes a $1.7 million signing bonus.

Kizer, the 52nd overall pick in the 2017 draft out of Notre Dame, is expected to begin the season as the third quarterback on the depth chart. He has seen most of his snaps in this weeks minicamp with the first teamers however and has looked decent, but like a rookie, in his limited action.

The Toledo native will be a project but has the skills to be a very good quarterback in the NFL.