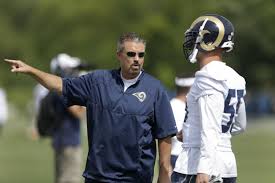 The hiring of Williams marks the end to the second, very short, tour of duty for outgoing Browns defensive coordinator Ray Horton. Horton has now been fired by the Browns twice in four seasons, both times after one season.

Williams, who was fired after the season by LA, led a defense with the Rams that was ranked ninth in yards and 23rd in points allowed. The Browns defense, filled with youth, finished the 2016 season giving up the third most yards and second most points in the league.

While he is best known for his role in the bounty gate scandal while with the Saints, Williams is a leader of men and expects greatness on the field from his defense.

Browns head coach echoed those sentiments in his first words after the hiring, “We are thrilled that Gregg Williams is joining our staff as defensive coordinator,” Browns head coach Hue Jackson said in a statement. “Gregg has been an outstanding defensive coach in this league for a very long time. His defenses have frequently finished among the top ten in the league. He adapts his scheme to maximize the strengths of his personnel and has always been able to get the most out of his players. We look forward to him coming in, helping our players improve and helping us become the winning team we are all working towards.”